The 2017 LWML National Convention will be held in Albuquerque, NM on June 22-25, 2017. The theme is “Jesus Christ Above All” based on Philippians 2:9. At their fall rallies last October, zones chose the following delegates: Central – Mary Harvala, Carrington; Eastern – Corrine Reber, West Fargo; Northeast – Donna Kroeplin, Devils Lake; Northwest – Laurie Rubbert, Upham; Southeast – Joan Beyer, Wahpeton; Southwest – Judy Luebke, Bismarck. At the LWML ND Board of Directors meeting last November, two young women were chosen to represent our district in Albuquerque as our Young Woman Representatives. They are Michaelle Peterson, Ellendale and Alissa Arndt, Fargo. Also attending will be our junior pastoral counselor Rev. Jacob Swenson, Hillsboro, along with District President Valerie Biberdorf. Please pray for these people as they attend the convention and represent North Dakota.

I also ask you to pray for yourself – pray that you will consider attending the convention in Albuquerque this summer. If you have attended a national convention before, then you know how amazing, fun and inspirational they are. Plan to go again! If you haven’t attended a national convention, now is the time! LWML will be celebrating 75 years of God’s blessings (1942-2017). Special exhibits and a 75th anniversary “Diamond Dazzle event Saturday night will highlight our past and look toward our future. There will be a “Diamond Dazzle Parade” which will begin the evening. Each district will come in with a sign noting their district name. The district president, past district presidents, and district YWRs will follow the sign in. The rest of the delegation is encouraged to make noise to accompany their district entering the hall. Some ideas for noisemakers: whistles, jingle bells, cowbells, drum, clappers, maracas, tambourine. You don’t want to miss this!

Registration for the convention will be in the Winter Quarterly which should have arrived at the beginning of December so hopefully everyone has their copy. Please read all the information in there and plan to be in Albuquerque on June 22-25, 2017 to help celebrate 75 years of LWML. Information can also be found at www.lwml.org.

“A fallen leaf is nothing more than a summer’s wave goodbye.”

Isn’t that nice? I don’t remember where I found that little quote but I know that some of us don’t like to wave goodbye to summer. Waving goodbye to summer means no more carefree warm days. Fall is coming and we all know what comes after that, don’t we? I have to say, however, that fall or autumn is my favorite season. I love the colors, the warm days and cool nights, apple cider, the scents of pumpkin and cinnamon in the air. Thanksgiving is coming – a time to celebrate the harvest and the bounty that comes from our God.

The theme of the LWML ND District convention this last June was “Rejoicing in God’s Bounty” based on Jeremiah 31:12b-14. It might have been a bit difficult to think about the harvest in June. We were still thinking about getting stuff planted and making sure it will start growing. But as fall comes upon us, the harvest is now before us. “…they will rejoice in the bounty of the Lord – the grain, the new wine and the oil…” “…I will give them comfort and joy instead of sorrow…and my people will be filled with my bounty, declares the Lord.” God’s bounty can be many things – food, clothes, shelter, family.

Some of you may know Rev. Bernie Seter. He is the pastor at Grafton and Drayton in northeast North Dakota. He also writes a blog called Northern Crossings Mercy. Last June one of his blogs was about our upcoming LWML District convention. Here is one paragraph:

“All of God’s bounty comes through Jesus. Our righteousness is given to us by Him. He is the bountiful giver of all good gifts. Those gifts are to be shared and given to others who do not yet know this Prince. The LWML is a great channel through whom those gifts are shared.”

Are you sharing the gifts that you have received from our bountiful Lord Jesus? I pray that you are. I pray that we all are taking every opportunity to share those gifts with those who do not yet know Him. We are truly blessed in the United States with many physical gifts. But not all know about the gifts that come from our God – forgiveness, mercy, eternal life, free salvation that comes from belief in the one true Giver and the Gift Himself, Jesus.

God’s continued blessings as we receive and share God’s bounty!

<>< ><> <>< ><> <>< ><> <>< ><> <>< ><> <>< ><> <>< ><> <>< ><> <>< Greetings in the name of our Savior Jesus! Let me introduce myself – my name is Valerie Biberdorf and I am your newly elected North Dakota District LWML President. I thought for those who do not know me, in this first message I would tell you a little about myself. I am a native Californian, born in Fresno. I have been married for 33 years to Rev. Richard Biberdorf. Richard is the pastor to churches in Carrington and Sykeston. We have lived in Carrington for 15 years. We have two sons – Nathanael is 26 and will be attending Concordia Seminary, St. Louis in the fall to begin his journey to becoming a pastor. Philip, 23, is a US Marine and at the moment is deployed in Spain. He will return to the states sometime in October. As I have been thinking about being your president for the next 4 years, a certain hymn comes to my mind.

“God moves in a mysterious way His wonders to perform.”

I would not have imagined that God would lead me to serve Him as an LWML district president. If you would have known me back in my growing up years you probably would have said I was quiet and shy. To stand up in front of people and talk was completely terrifying to me. Yet, God has moved and led me to this place where He wants me to be. And my job, along with being president, is to trust Him and be in prayer and study His Word and let Him show me the way. And I know that He will do that.

But He doesn’t just do this for me. He does it for all His children who believe in Him and His Son Jesus who came and died that we might have forgiveness of sins and a new life in Him. This is the gift He gives us, freely and without cost to us. He gives us more than we could ever imagine just because He loves us so much. Amazing isn’t it, and somewhat mysterious to us humans.

Next year, 2017, we will celebrate the 500th anniversary of the Reformation. If you have not seen the logo and tagline that goes with it, I hope you will check it out. The line is “It is STILL all about Jesus.” When I saw that, I thought “Yes, that is perfect!” Because it IS still all about Jesus. That is what LWML is all about too. Sharing Jesus and proclaiming His saving love for all people. We do it with our Mites and we do it with our mouths and our service to Him.

God’s blessings be with all of you as you serve Him with gladness! 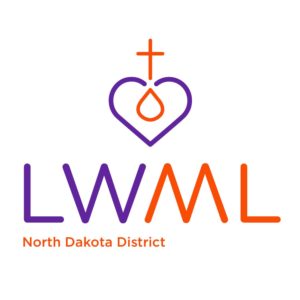